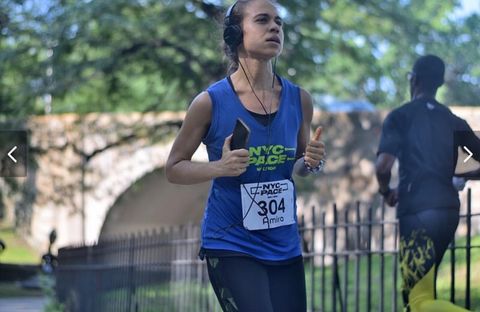 Growing up, I was a very heavy kid. I wasn’t active at all. In high school, I would lose weight and gain it all back. About two and a half years ago, I was considered obese on the BMI scale.

I started on a diet, and I lost weight in a healthy way, but it made me want to lose more and more. Image was part of it—I worked in fashion, and I didn’t want to feel insecure about my weight in that environment.

Although I had started my journey wanting to feel better about myself, I soon became addicted to seeing that number on the scale go down each week.

Wanting to Get Smaller and Smaller

I kept setting new goals for myself. Can I get to this certain weight? I’m 5’6” and my final goal weight was 99 pounds.

I didn’t realize it at the time, but getting smaller gave me validation. I was doing anything to lose weight, and started some unhealthy behaviors along the way. My weight dropped pretty low, and my family was starting to notice. We don’t really talk about emotions, but I could tell my dad was very concerned. I was calling out of work so much because I just felt really weak. Any little virus that went around, I would get—and get it 10 times worse.

Finally, I went to doctor, who said I was anemic and had vitamin and electrolyte deficiencies. I was diagnosed with bulimia.

In 2017, my employer at the time saw me go from really heavy to super thin. At my lowest weight, I was 102 pounds. They stepped in and got me a nutritionist. I started seeing her, but I didn’t want her to help me gain weight—I just wanted her to put me on a plan that would make me maintain it. I also started seeing a therapist, and was really focused on going to my doctor’s appointments. But it was still a struggle for me.

At the time, I had been taking sleeping pills because I just couldn’t sleep—I was too hungry. My turning point came when I took too many of them. I wasn’t trying to commit suicide; I was just desperate for sleep.

I got really dizzy, and it freaked me out. I opted not to go to the hospital to get my stomach pumped because I was afraid they would send me somewhere for my eating disorder.

That was a wakeup call for me: I was too afraid to seek medical help for what could have been a serious problem because I was afraid it would address my eating disorder—and that I’d end up gaining weight. I realized I needed help. I needed to accept what my doctors were saying I needed to do to get healthy.

An Introduction to Running When I Needed It Most

Around this time, one of my best friends asked me to do a 5K. She told me that we could walk it if need be, that she didn’t want me to get competitive with myself. I had honestly never exercised in a healthy way before that. I would go to the gym and try, but I would get dizzy so quickly. Or I would go and focus on burning the most calories possible.

But I wanted to give the run a try. I had put on a bit of weight so I could do the 5K, and knew I was okay to participate in a healthy way.

It was my first run ever, and the adrenaline caught up to me. I was able to run the whole thing. I really thought I would walk the whole way, but I surprised myself. From there, my love of running snowballed.

It made me relate to my body in a way I never had before. I didn’t have to starve it or hate it to feel something about it. I was proud of my body for something that wasn’t about aesthetics, which was very weird for me. I had always been the biggest critic of my body, especially my legs. But how can I hate them if they’re taking me through all these runs?

I used to be a smoker—I thought it would help me keep my weight down—but you can’t run and smoke. So running also helped me quit smoking.

I knew I wanted to do a 10K next. I started going to parks on the weekends to run. Last November, I ran my first half marathon, and am currently training for my second half, which is coming up soon in April. Right now, I run 3 to 4 times a week and am working on my pace for my second half.

[Want to start running? The Big Book of Running for Beginners will take you through everything you need to know to get started, step by step.]

In the back of my head, it’s always a little bit hard not making the run about burning calories. With nutrition and food and recovery, some days are definitely hard. I still have those days when I think, if I skip breakfast or lunch, it will make the pain go away. But it gets better with time.

It’s a mind game. I try to eat what makes me feel good and what supports my training. And I’m working on the fact that it’s also okay to indulge without being so hard on myself. The feelings of wanting to purge have gone away more than the feelings of wanting to restrict. I have still been seeing a therapist—for me, it’s a lifelong thing, to be in and out of therapy. I go back when I feel like I really need it. My weight continues to reach a more healthy level, and I’m enjoying cooking and fueling my body well.

The running community in New York City has also helped. I always run in the New York City Runs group races, either 5Ks or 10Ks. I love going to them because they’re so supportive. They have cheer squads. I also do group runs at a shoe store called Jack Rabbit. I go a couple times every month just to run with other people. Everyone here has a story.

Gaining the Mental Benefits of Running

For me, running is a release. I listen to music, but lately, I’ve been listening to some motivational spoken words. It’s called Your World Within, and they have one I love focused on running specifically.

Running has made me mentally stronger. It’s like meditation—I feel most present when I run. When I’m running, I feel that surge of energy and a mental release. For someone like me who is so critical of myself and plays back everything in my mind, to be able to silence that for the length of my runs is something I’ve been really thankful for. It’s something I used purging for before, and now I have a healthy way to achieve that.

Exercise always made me so much weaker, and now, it’s the opposite—it makes me feel so much stronger. I used to be driven purely for aesthetics, and now, I’m driven by my performance. I thought I would be super hard on myself, but it’s actually been the opposite. I’m so much more forgiving. I don’t have a bad run—it still feels great. I’m seeing my body like I’ve never seen it before.

Recovery is not linear, it’s not perfect. It’s just about getting to the next day.

An unexpected change? Running also made me more positive. I was very negative before. But when I started running, I ended up being a more pleasant person, a little bit less of a Negative Nancy. If I had frustration or anger, I would emotionally litter on all my friends. They can confirm I’m a more positive person!

Living in recovery from an eating disorder is a challenge every day. I still have bad thoughts, but it’s not necessarily about completely ignoring those bad thoughts—it’s observing that they’re there and making the decision to not act on them. I always read that during recovery, those thoughts would go away. They do and they don’t, but it’s about taking those emotions, recognizing they’re there and letting them pass and not acting on them.

Recovery is not linear. It’s not perfect. It’s just about getting to the next day. As hard as it may seem to me, there are other ways to look at your body than a number on a scale. Easier said than done! But running has allowed me to set goals that aren’t about how small my waist is. It’s freeing and liberating.

If you or someone you care about is struggling with an eating disorder, contact the National Eating Disorders Association (NEDA) helpline at (800) 931-2237.

This content is created and maintained by a third party, and imported onto this page to help users provide their email addresses. You may be able to find more information about this and similar content at piano.io
Advertisement - Continue Reading Below
More From Start Running
4 Tips for Improving Your Speed and Endurance
What You Need to Know About Running-Shoe Size
Advertisement - Continue Reading Below
Get Faster Without Running Out of Breath
How to Start Running Again After a Break
How to Deal With Ankle Pain While Running
How to Build a Better Postrun Recovery Plan
Half Marathon Training Tips for New Runners
How to Treat and Prevent Foot Cramps
​How to Practice Hills When You Have No Hills
How Can I Prevent Bloody Nipples?