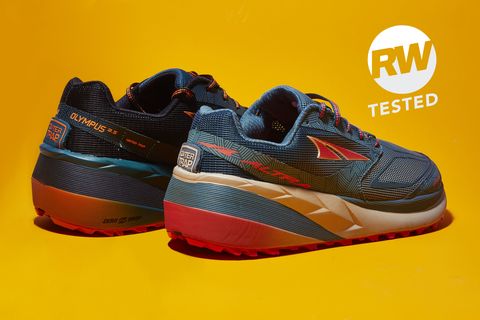 The RW Takeaway: The indomitable Olympus 3.5 crushes and claws through any obstacle on the trail.

The Olympus is a whole lotta shoe—at least that’s what came to my mind the first time I laid eyes on it. Yet in spite of its appearance, it’s remarkably light. Running on a trail, I felt the thick midsole and grippy outsole could take on any branch, any bramble. But my pace was more like the thunder lagging behind Zeus’s lightning. There’s just a little too much heft to pick up the tempo; I was mindful of not scuffing my toes, afraid of kicking up—or even eating—some dirt. Fortunately, this didn’t happen, most likely because the zero-drop offset positioned my forefoot and heel’s hight equidistant from the ground; I wasn’t leaning forwards unlike the case with normal heel-to-toe drops where the heel is higher. Butt it was still distracting as I maneuvered my way over gnarly roots, trying not to trip over them or my own two feet.

Our testers were divided with their comments on the Olympus. Some were in my camp, saying there was just too much cushioning in the shoe. “Way too much,” one said. “I could not feel the ground and that made me feel unstable.” Still, the Olympus is the tank to other cushioned shoes’ tractor; they can't match this Altra's ability to roll over whatever debris is in your way.

But others stated the opposite, citing they found no flaws with the shoe. Contradictory to my observations, the ample padding underfoot won them over. “The cushioning and support were the best features for sure,” said a tester. “These shoes were so soft and put my feet higher off the ground that I felt like I might roll an ankle. In other words, I felt like I was running in high heels. But after a few times out, I gained the confidence in my foot placement in the shoes and trusted the support and cushioning.”

No matter whom you believe, this summation is true: The Olympus is for runners—Clydesdales in particular will appreciate the soft ride—looking for a combination of Hoka-level cushioning, ample toe room, and zero drop on a robust shoe when they hit the groomed to technical trailhead.

The Olympus’s lug pattern isn’t as toothy as the brand’s other trail shoe, the Lone Peak, but you don’t necessarily need an aggressive tread to ensure stable footing. The sticky Vibram Megagrip outsole was even “too grabby” for some of our testers who ran on tall grass and roots. But on downhills slick and sloshy from heavy rain, the shoe’s grippy bottom was a godsend.

Testers raved about the 3’s cushioning and their opinions haven’t changed much concerning this soft update—at least in regard to comfort and impact. The plushness of the midsole, which is the same EVA foam used in the third iteration, was a major draw for all of our testers, including me.

But one was bold enough to race a 10K in this shoe, and he wasn’t disappointed by how well he—and the shoes—performed. He gave one of the most endearing compliments ever granted to a shoe: “What stood out the most was the amount of times I considered it to be just a great day in a great all-around shoe.”

Terry B., tester since 2012
Arch: Medium | Gait: Neutral | Footstrike: Heel
“This is probably the best shoe I’ve tested/worn as far as cushioning is concerned. I am VERY partial to cushioning and this Altra steps it up. The Hoka Cliftons have excellent cushioning also, but I would give this shoe top rating in this area. The other Altras I’ve tested do not come close to this one. The thick heel helps absorb the impact and I’ve had less aches and pains in my feet and back. The softness sometimes interferes with speed, but it also forces me to improve my turnover and not run lazily.”

Patti P., tester since 2013
Arch: Medium | Gait: Neutral | Footstrike: Midfoot
“I run on trails only. For this test I was at Blue Marsh and the Finger Lakes trail in New York. Both trails have a technical surface of rocks and roots. I thought the shoe was way too bulky. Walking around I felt like I had two bricks on my feet, and when I run I am often kicking my opposing ankle with the heel of the shoe. It was super cushioned though, and I have to admit that I got used to the padding. I usually run in minimal shoes.”

Amanda Furrer Test Editor Amanda is a test editor at Runner’s World.
This content is created and maintained by a third party, and imported onto this page to help users provide their email addresses. You may be able to find more information about this and similar content at piano.io
Advertisement - Continue Reading Below
More From Trail Running
How to Plan a Hut-to-Hut Running Adventure
Winter Trail Running Safety Tips
Advertisement - Continue Reading Below
Nike Pegasus Trail 3: A Smooth Road-Trail Hybrid
The Best Headlamps for Runners
New Release: Allbirds Trail Runner SWT
The Best Running Shoes for Fall 2021
VJ Ultra: Grip That Goes the Distance
The Best New Balance Trail Running Shoes
Trail Speedsters, Meet Hoka One One’s Zinal
Run Confidently on Rugged Trails in the Superior 5