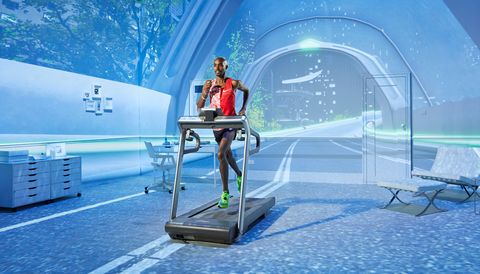 When you think of Zwift, chances are you immediately think of cycling. And that makes sense. Since its founding in 2015, the online training platform has reshaped the way cyclists perceive indoor training, and boasts an ever growing user base of athletes pursuing a better way to train indoors.

For those in need of a refresher, here’s how Zwift works: Users log in, sync their indoor bike trainer to the Zwift app via a computer, iPad, or smart TV, and work out or compete alongside riders from around the globe in the app’s virtual world, Watopia. Zwift even syncs with other training apps like Strava and Training Peaks, so users can continue to enjoy those communities as well.

By gamifying indoor cycling and making the trainer an appealing option for riders, Zwift did what others had tried and failed to do forever. Now, they’re shifting their goals and resources towards once again doing the seemingly impossible: making the treadmill fun. Their hope now is that when you hear their name, you just might think of running, too—and so far, they’re succeeding. Here’s how.

“While many folks would rather be running outdoors, the treadmill is a huge boon for the time-crunched, efficiency-seeking athlete,” says Mike McCarthy, VP of running at Zwift. “We know so many dedicated runners who have to do a substantial amount of their training on the road late at night or in the dead of winter,” he adds.

McCarthy says the platform eliminates those concerns with only three pieces of gear required: “Zwift offers a solution for [runners] as long as they have access to a treadmill; a computer, mobile [phone], tablet, or Apple TV; and a device [like a shoe pod or treadmill sensor] that can broadcast their speed data into the game.”

Like the cycling version, Zwift for running is free to try for seven days. Unlike the cycling version, it stays free after that. All Zwift subscriptions are contract-free and users can cancel any time. And while signing up may be especially appealing during winter’s chill, the platform’s many other benefits stand up even after the thaw.

Showing runners the world, while they run in place

In addition to being simple and efficient to set up and use any time, Zwift allows you to change your on-screen scenery, too. Within its virtual world, you can train in maps mimicking New York City, London, and Austria, among others. “Some are truly massive and fantastical,” says McCarthy.

Plus, as people from around the globe log on to explore those routes all the time, you can virtually run with other users located oceans away. “We just broke our concurrent user record with more than 16,000 Zwifters, and we’re looking forward to growing the number of those runners from around the world,” McCarthy says. That’s a pretty major expansion of the treadmill experience, which is by definition limited to one person running in one place.

One of those runners you might interact with is professional runner Gwen Jorgensen, a poster child for Zwift’s shifting focus if there ever was one. Jorgensen won the USA’s first-ever triathlon gold medal at the 2016 Summer Olympics, only to retire from the event in 2017 in order to pursue the marathon, then re-focus her attention to the upcoming track and field trials June. Based in Portland, Oregon, Jorgensen typically logs on for her second run of the day, “without being limited by the daylight or conditions outside,” she says.

That especially comes in clutch when darkness hits earlier during the winter months (and it’s also cold, icy, and the rest of the adjectives that make you want to do anything but run outside), but the weather isn’t the only mitigated element. “I can run faster and without stopping for stop lights or twists or turns or anything else,” Jorgensen says. “When I run indoors, all I need to focus on is running.”

Another highlight that makes Zwift a great supplement to Jorgensen’s outdoor training is that it helps her focus on form. Jorgensen has found that treadmill running hones her attention more acutely on things like her pace, foot strike, cadence, ground contact, rate of impact, stride length, and leg swing, and make in-the-moment adjustments. “I can analyze my form while running and step off the treadmill if necessary to activate my glutes and hop back on,” she explains. “By having better form and mechanics, I am able to stay healthy and run faster and further.”

Beyond personal goal-planning, Zwift’s thriving online community is a huge draw for runners looking to add some extra motivation to their training. With a plethora of group runs, races, and workouts, users can tap into the power of friendly competition and group dynamics to help pull them through a tough effort, even if they don’t have access to a team workout or might find it intimidating to show up at the track for an interval session.

“Using Zwift makes running inside fun,” says Jorgensen. “I used to hate using a treadmill, but now that I have a virtual community to run in, I love that I am able to interact with people from all over the world.”

“Zwifters are known for being super supportive, and there’s a tremendous amount of motivation and accountability that comes from being a part of a community of like-minded runners,” adds McCarthy.

The company recently wrapped a virtual 5K event led by CEO Eric Min and featuring track legend and marathoner Mo Farah. More than 500 participants ran along with the Olympic champion and posted questions for Min. Zwift’s events page reveals a slew of other opportunities to squad up and interact, including the marquee Tour de Zwift, the upcoming Tour of Watopia, the New Balance Run Club, a 5K group run led by Australian age-group triathlete Ben Shepherd, and a group of Zwifters all aiming to complete 100 runs (lasting 30 minutes or more) in 100 days.

Additionally, Zwift is bridging the in-platform world with real-life roads by offering training plans for distances ranging from 5k to Marathon, including the popular 3Run 13.1 that brings runners up to half marathon speed with just three runs per week.

They’ve also partnered with the L.A. Road Runners on an in-game training plan for the L.A. Marathon in March. Runners complete weekly runs and community members regularly organize group runs and races. Some ambitious Zwifters have even completed in-game marathons. Therein lies the power of Zwift: where a treadmill marathon becomes a game.

And as for what’s to come, McCarthy highlights a new offer, the Runn™ Smart Treadmill Sensor (available in the brand’s gear shop), which lets runners convert their traditional treadmills into being Zwift-compatible, no foot pod needed.

The only thing stopping you from treadmilling your way to a PR is your preconceived notions of what the treadmill is. Zwift is more than ready to change your mind.

Emily Abbate Emily Abbate is a freelance writer, certified fitness trainer, and host of the podcast Hurdle.
This content is created and maintained by a third party, and imported onto this page to help users provide their email addresses. You may be able to find more information about this and similar content at piano.io
Advertisement - Continue Reading Below
More From Training
19 Best Pieces of Home Gym Equipment
4 Tips for Improving Your Speed and Endurance
Advertisement - Continue Reading Below
A Bodyweight Arm Workout for Efficient Running
The Best Kayaks for a New Spin on Cross-Training
4 Sprint Workouts Guaranteed to Make You Faster
3 Jump Rope Workouts for Improved Fitness
10 RW+ Members Reveal Their Best Shakeout Run Tips
Can Running With a Weighted Vest Help Performance?
A Calisthenics Workout to Help You Run Longer
5 Best Stretching Apps for Runners