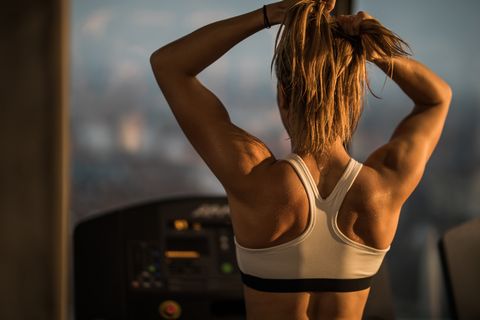 Sure, runners need strong legs and a sturdy core, but your posture and arm swing play key roles in how efficient you are on the run. Neglecting your back and biceps at the gym can lead to major losses in speed and power.

“From a scientific perspective, your arm swing can generate up to 30 percent more power,” says Peloton master instructor Rebecca Kennedy. “Whether you’re a sprinter or a long distance runner, the need for arm drive and upper body strength exists no matter what.”

Related Story
How to Best Combine Strength Training and Running

Before you can generate that power, though, you need to dial in the right form. While running, your elbows should be bent at about 90 degrees. But that degree of the elbow flexion can translate into a change in your stride frequency and your overall drive rate.

“When you want to add on speed or power, you’re looking for force production and velocity. You’re going to need the arm to open up a little bit more on the backswing and then really drive forward and create more propulsion on the front swing,” says Kennedy. “Whereas if you tend to overstride or if you have a little bit too much bounce, then you might want to close that gap and tighten up that 90-degree angle, which actually forces your feet into a higher turnover rate.”

To max out those benefits, you need to have the strength and mobility to support them. That means training your body to perform in that front-to-back, reciprocal (or opposite) motion, which stabilizes the trunk and keeps you from wasting energy by over-rotating, says Kennedy.

Get your upper body primed for power with this back and biceps workout created by Kennedy and demonstrated by Runner’s World+ Coach, Jess Movold.

How to do it: If you’re running three to five days a week, you should also be doing two days of running-specific strength work, says Kennedy. Perform each move for 30 seconds, rest for 30 seconds in between each move, then repeat the circuit two more times for a complete upper body workout. You will need an exercise mat, a set of dumbbells, an extra large resistance band, a medicine ball, and access to a pull-up bar.

Or use these moves to create mini-circuits that go along with your total-body training: Start with single-arm planks both days. Then, on the first day, focus on push moves: hand-release push-ups and med ball chest passes; on the second day, focus on pull moves: reciprocal rows, renegade rows, and chin-ups.

[Smash your goals with a Runner’s World Training Plan, designed for any speed and any distance.]

How to do it: Start in a high plank position with wrists under shoulders, core engaged so body forms a straight line from head to heels. Extend right arm straight out in front while holding the rest of your body steady. Hold for 30 seconds. Repeat on the other side.

“This is a necessity because it’s going to teach you how to move in the sagittal plane without rotating,” says Kennedy. “That’s exactly what we’re looking to translate into your run.”

How to do it: Start in a high plank position with wrists under shoulders, core engaged so body forms a straight line from head to heels. Bend elbows to lower chest slowly all the way down to the floor. Lift hands up, place them back down, then push back up to the starting position.

Alternatively, to engage lats, reach hands straight out then pull back to chest and push back up to the starting position. That will give you that overhead lat pulldown motion, “which gives you a really good shoulder flexion moment and engages the lats to pull down,” says Kennedy—and considering your lats are the largest muscles in your upper body and help stabilize your spine as you rotate your torso, that’s a win-win.

How to do it: Start in a high plank position with hands on two dumbbells, wrists under shoulders, core engaged so body forms a straight line from head to heels, and feet in a wide stance. Engage your back to slowly pull right hand up to the rib cage then slowly return the weight to the floor. Repeat on left side side. Continue alternating. To make it easier, master the movement without weights first, then add weight.

“If you flipped the renegade row into a vertical stance, your arms would be moving in front of you and behind you in the same range of motion as you run,” says Kennedy. “So you’re actually learning how to engage your biceps, lats, rhomboids. serratus anterior, and all of your rotator cuff muscles, the same ones that help you maintain posture and power during a run.”

How to do it: Stand with feet hip-width apart holding a dumbbell in each hand. Hinge at the hips and micro-bend knees to assume a bent-over position, arms extended to the floor. Row right hand up to rib cage, then as you lower it, start to row the left hand up to rib cage. Continue to alternate, moving as if your arms are a pulley system; go for speed.

“You’re going to find this same exact torque in your body, that front-to-back shoulder movement, when you’re running,” says Kennedy. “The power is coming from your back, your shoulders, and your biceps.”

How to do it: Hang from a pull-up bar with your hands shoulder-width apart, palms facing you. Leading with your chest, pull yourself up slowly until your chin touches the bar, then slowly return to the starting position (no swinging). To make it easier, loop an extra large, thick resistance band around the bar and slip your foot into the end for assistance.

Related Story
Is It Better to Do Cardio Before or After Weights?

Even if you start with banded or assisted chin-ups, “if you can pull your body weight up, you're going to be super strong,” says Kennedy. “In long distance running, one of the things that’s first to go is posture. If you start collapsing in your upper body, you start to fatigue. A chin-up is really going to work the biceps, stabilize you through the shoulders, and work your lats like crazy—it basically focuses on everything in the upper body that has to do with a strong force production.”

How to do it: Stand with feet hip-width apart, holding a med ball at your chest. Hinge at hips and bend knees slightly (like a deadlift position), then throw the ball into the floor as hard as you can, catch it, and throw it right back. Go for as many reps as you can.

This is a dynamic chest exercise that works your biceps with the toss. In the bent-over position, “you’re lighting up your posterior chain,” says Kennedy. That includes the hamstrings, glute max, erector spinae muscles, trapezius, and posterior deltoids—all muscles that work to keep you standing tall and moving forward on the run.

Ashley Mateo Ashley Mateo is a writer, editor, and UESCA- and RRCA-certified running coach who has contributed to Runner’s World, Bicycling, Women's Health, Health, Shape, Self, and more.
This content is created and maintained by a third party, and imported onto this page to help users provide their email addresses. You may be able to find more information about this and similar content at piano.io
Advertisement - Continue Reading Below
More From Strength Training
How to Prevent Running Injuries
Should You Join a Hybrid Gym?
Advertisement - Continue Reading Below
How To Do a Reverse Fly Properly
How to Do the Dead Bug Exercise
A Standing Ab Workout to Test Your Stability
Test Your Stability With This Bosu Ball Workout
What is a Superset?
5 Single-Leg Exercises to Improve Your Performance
6 Anti-Rotation Exercises for Runners
Hip Pain? Pay Attention to the Iliacus